Make the Most from Your Camera Exposure (ISO, Shutter Speed and Aperture)

The basic key to taking good pictures is learning to make the most out of your camera exposure features, which unfortunately is something most beginners don’t look into. Most DLSR cameras now have “auto” modes that adapt the camera to the lighting conditions, enabling their users to not look into those settings themselves, but the results obtained using the camera’s auto mode are far from satisfactory. Also, no matter how much you play with your pictures afterwards in a photo editor like Picassa or even Photoshop, even if you use the most sophisticated auto-contrast and auto-lighting tools, you pictures still won’t be that great. 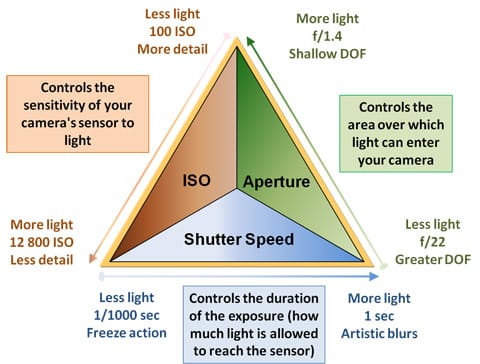 The only thing that can make them truly spectacular and vouch for your truly professional photography skills is using the right camera settings in the first place instead of resorting to post-editing. Those camera exposure settings you should learn more about are sometimes called the camera exposure triangle: we’re talking about ISO, shutter speed and aperture. Here’s a short introduction on what you can do with each of those.

We’ve already talked to you about the importance of adjusting your ISO when we discussed a few tips on taking better family portraits. The ISO is a number reflecting your camera’s sensitivity to the available light. A lower number reflects a lower sensitivity (and must thus be used when there’s plenty of good light), while a higher number reflects a higher camera sensitivity. ISO 100 and 200 are considered low in most circumstances, 400 would be a medium, while every number bigger than that would be a high value. Greater ISO also comes with a cost: the higher the camera’s sensitivity, the more “grain” or noise in the photo’s quality. Still, when the lighting is poor or you’re trying to photograph a moving target, the payoff may be worth it. Experiment with this setting, get to know your camera and decide for yourself.

The second setting from the so-called camera exposure triangle which you should learn about is the shutter speed. This is a number reflecting the length of time for which a camera shutter is open for exposing light inside the camera sensor. Since we’re talking about advanced cameras here and not hundreds of years models, this number will obviously be a measure of fractions of a second. Really fast shutter speed settings (like 1/115) can successfully be used to freeze motion, while deliberately low speeds (like 1/15 or 1/20) can allow more light into the camera, making this a perfect setting for nighttime photography.

Last, but not least, we should talk about the aperture feature. This is more like a technical built-in characteristic of the camera itself, referring to the hole with a lens through which light passes into the camera body. The larger this hole is, the more light can pass, making the camera more apt for certain types of photography. The depth of field (usually expressed through the letter f and is sometimes called the focal ratio) also depends on the camera’s aperture, and this refers to the portion of a scene which appears to be sharp. The larger the aperture, the smaller the depth of field will be and vice-versa.

Now remember: the important thing, besides learning how to use each of these better, is learning how to use them together. That means that if you increase one, maybe one of the others needs to be slightly decreased to compensate, and so on. For example, a large aperture usually calls for a high shutter speed, to prevent overexposure and so on. We can’t provide you with exact formulas here, because all this adjusting would depend not only on what your current camera settings are, but also on what exactly you’re trying to photograph, if it’s indoors or outdoors, in what kind of lighting conditions and so on. You need to research these things yourself, starting with your camera’s manual. Once you’ve managed to get those camera exposure features to work for you, the most important technical requirements for great pictures have been met.