Celebrating Earth Day 2013 As A Photographer 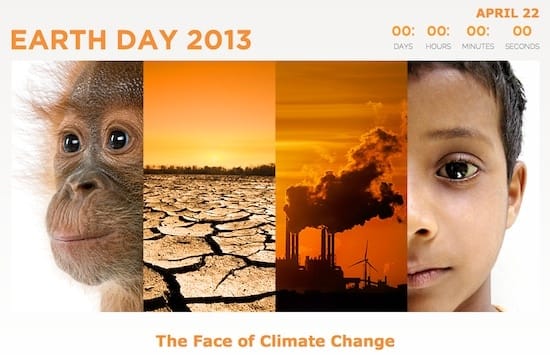 43 years ago, Earth Day officially became a celebration throughout America.

It started out in much the same way as every movement does. A US Senator from Wisconsin decided to take action after witnessing the ravages of the 1969 massive oil spill in Santa Barbara, California. Inspired by the student anti-war movement, he realized that if he could get energy into public consciousness about what was truly happening to our earth – what water and air pollution was truly doing to us, it would be a massive wake up call to the change that had to take place in order for us to survive.

On April 22, 20 million Americans took to the streets, parks, and auditoriums to demonstrate the need for healthy sustainable environmental choices. People that had been fighting against oil spills, polluting factories and power plants, raw sewage, toxic dumps, pesticides, freeways, the loss of wilderness, and the extinction of wildlife suddenly realized they were all involved in a common goal. Each little piece plays an important part in the overall quality of Mother Earth. And if we don’t take care of it now, She won’t take care of us later.

Every year for the last 43 years, Earth Day takes on a new vantage point for raising awareness. This year – Earth Day 2013 – is all about The Face of Climate Change.

Statistics consistently show we are getting warmer, with 2012 being the ninth warmest year on record. The Artic sea ice is declining at a rate of 11.5 percent per decade. Land ice sheets are losing more than 100 cubic kilometers of ice per year since 2002. We’re emitting more carbon dioxide into our air, and sea levels continue to rise.

The statistics go on and on.

While it may be confusing to understand all that is happening, ignoring it at this point is simply not an option.

In today’s world, almost everything impacts our world in some way. Fracking, our changing food supply, water supply, environmental destruction – look in your local paper and you’re sure to find dozens of ideas that are impacting the environment – and that may be near and dear to your heart.

As photographers, we can use our passion in many ways, including becoming involved in a project and showcasing what it truly means to our society.

Just look at the impact James Balog is having (his Chasing Ice is on National Geographic channel this month).

With that in mind, what can you do to make a difference?

Start with something local

People often feel to make a difference; they have to go half way around the world to show what’s happening from all angles. Not true. Instead, focus in on something that is happening right in your hometown. Are there endangered wetlands in a nearby community? Or maybe an animal that is losing its habitat? Is there a hot topic that everyone is talking about – for example, fracking is huge across the Colorado landscape – how is that impacting our survival?

Do your research. Find out what the issues truly are. Attend group meetings, both for and against the topic. Really learn what the issues are. Then create a photography plan to prove what is truly happening.

If you watch James Balog’s Chasing Ice, you’ll discover that’s how he became an activist. He started filming ice as a part of his job, and what he found through his photographs gave him insight he couldn’t ignore.

The problem with most projects is people simply don’t care. They don’t see the impact on their own lives, and with so much going on, why should they think about one more thing anyway?

While photographs are beautiful, they are a one time view and forget concept. It’s the stories that tug at the heartstrings and want you to take you to a whole other level of caring.

As you find your cause and begin to take action, you’ll learn a lot about the situation. You’ll learn which side you want to support and what the implications are. Don’t worry about pleasing everyone – that will never happen. Be true to your side and present things in a meaningful way that will truly stick with people long after they hear what you have to say.

Then get your word out there. You can submit to a variety of environmental magazines – try the Society of Environmental Journalists or MediaBistro for tips on how and where to submit.

No idea is crazy

Remember, no matter what angle you have, or what your passion is, there is always a way to take it forward and become the expert on it. You can fund it before you even take action using crowdfunding sites.

Dig Deeper: Crowdfunding – Is It The Solution To Your Next Great Photo Project?

Come up with your idea. How will you execute the project and what will the final projects be? Who would you team up with make the project that much better? What are all the issues – is there a complimentary project that you can build from?

The stronger you make your project up front, the more successful it will be in the end. Leave nothing to chance, and develop it as thoroughly as possible along the way. Don’t underestimate the power of people and a great idea. If you build from both, you’ll have a dynamic project that will carry you forward many years into the future.