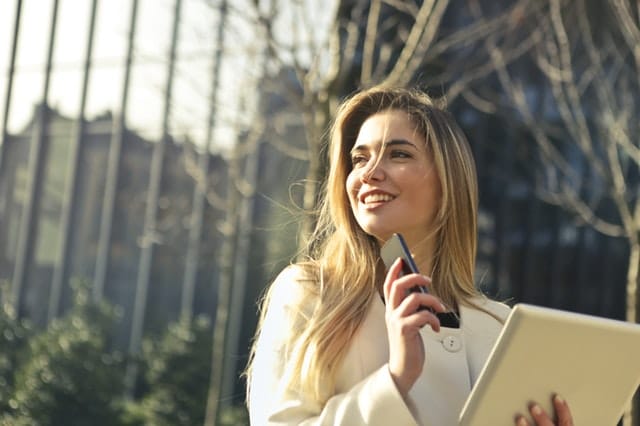 The only way to succeed with social media is to have a following. And the more time you spend building your following, the more results you will see.

And people love free stuff. They are completely attracted to coupons, deals of the day, and anything “fun” that will allow them to get a hold of a great product at a great price. Which is why many smart businesses have turned to social media contests.

Dig Deeper: How To Start Up A Pinterest Contest

Dig Deeper: The Guide To Growing Your Facebook Page With A Contest

However, the social media platforms and the rules to follow are always changing. What worked a few short months ago may be “illegal” by today’s terms. If a contest is in your future, it’s important to evaluate your options regularly and choose the right platform to grow – the right platform to attract quality prospects to your studio.

When Pinterest first started up, it quickly took the Internet world by storm. Almost overnight, people – mainly women – flocked to it quickly and admitted its “addictive” qualities is what made them come back again and again. For photographers, it’s a dream come true. Where else can you jump on such a wildly successful marketing platform – for free? From May 2011 to May 2012, Pinterest grew at 4,377 percent. Compare that to Twitter at 58 percent, or Facebook at 4 percent.

With Pinterest, there is no set template or rules for running a successful contest. And the more creative you are, the more successful you will be. The key to a successful contest is (1) a great prize, (2) a way to share with others, and (3) keeping people active for a short period of time. Don’t think one long, drawn out contest. Instead, hold several short ones to capture attention quickly.

Many contests start with an article on the company’s blog, announcing the rules, directions and prizes. Some companies will require participants to pin or repin certain images from the company’s Pinterest page and select winners randomly from those who have repined. Other options include having users create specially named personal pinboards and collect designated images, or having others “like” images and the one with the most “likes” wins.

Peugeot has a great idea with its puzzle promotion. Check out their Pinterest page for ideas – I love how their board titles actually communicate ideas with you. Once you are in their page, by clicking and finding missing images, you can complete the puzzle. Prizes are awarded to the first five people to complete each puzzle. 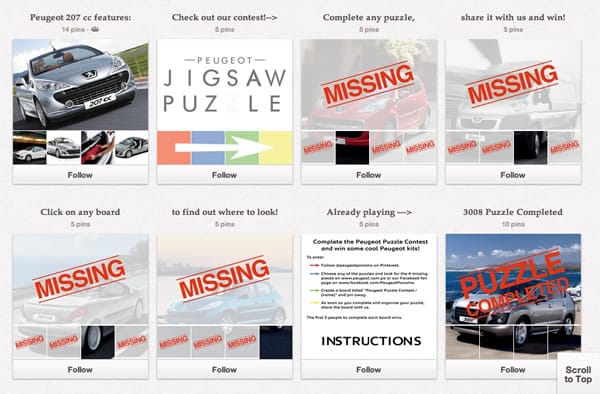 Facebook is by far the most established social networking site of the two. And therefore it has certain advantages over others. With over 955 million monthly active users as of June 2012, potential is not on the list of problems you may encounter. However, unlike Pinterest, Facebook is filled with rules and policies, and has specific requirements on what it allows for running contests. For instance, you must not use Facebook features or functionality, such as the Like button, as a voting mechanism for a promotion. With many different policies in place, and changes made on a frequent basis, it’s a good idea to check in with the policies periodically as you are running your contests. After all, Facebook has the right to reject or remove Pages for any reason, and that’s the last thing you want to happen if you’ve built up a strong following.

GoPro runs contests all the time and gives away everything they sell. You can sign up on their site, and from there they promote their contest all the time on their Facebook wall.  They have pictures and videos showcasing what their customers are doing – and it brings people back to comment again and again.

Which is better for you?

It depends. Where are you putting your focus? Where is your audience? Which platform do you use and enjoy using? Pinterest contests are obviously more accessible and have much more freedom to allow your creativity to show. Facebook has more risk, but as long as you play by their rules, the opportunity is tremendous.

If you prefer creativity and flexibility, Pinterest may be your option.

If you are building a community on Facebook and already have a following, continuing the growth on Facebook may be your choice.

In either case, track your success with analytics and keep track of what the overall benefits are for you and your business throughout the process.