What You Can Learn About Marketing From Steve Jobs

Last night I ate a quick dinner and ran out the door. It was my first night of a new meditation class, and I was excited to get there. In our house, dinner means “no technology”, so we hadn’t yet heard the news. But that all changed two minutes after I jumped in the car. It was everywhere. The world was now missing a visionary and a genius. 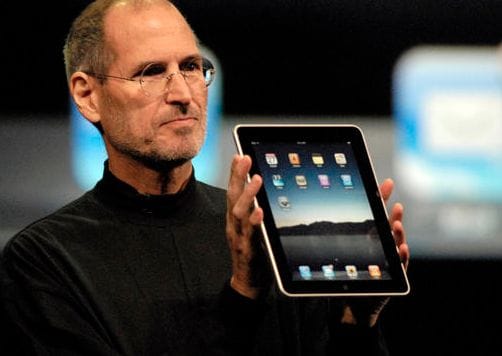 Whether you love Apple or not, there is no denying Steve Jobs was a true genius. He saw way into the future, and had the ability to create great products that people didn’t just want, they obsessed over. They were passionate about. It was almost at a cult like status.

Yep, in many ways we were passionate from afar. We bought computers way before they were cool. We were one of the first photographers to design a website. And we progressed into PC because, well, that’s what we did. Then we bought another computer. And another. And software. And more software. And somewhere along the way, we really wanted to switch to Apple. But with multiple computers at any given time – 7 was our highest of working computers that we actually used, and the amount of software it took to run them, it would have been more than an expensive venture for us to switch. So we jumped into Apple products with everything else, starting with iPods. Today I absolutely love my iPad, and you’d never get it away from me.

After many “blue screens of death” and the realization that we just don’t need that much software anymore – everything is online – we made the switch this week to Macs as many of you know. We’re now completely Apple driven.

Its About The Products, The Services, And So Much More

For years (and years) we used PC. And we grumbled along the way. “I hate viruses.” “I hate waiting forever for it to load.” A little over a year ago Andrew opened up an Internet page on his desktop computer, and immediately said “uh oh”, it’s a virus. That virus completely shut down his computer – between him and an IT guy, they couldn’t get it back after three days, so he went out and bought a new desktop. But Andrew’s latest bought with “the blue screens of death” finally did it.

Can you imagine someone putting up with a product for a long period of time, wishing they were customers of another company, counting the days until they made the switch?

What completely converted us was ease of use. If you have one of the original iPods or even a shuffle today, you know it works flawless. Compare that to any other MP3 player, with its clunky buttons and adjustments. There’s just something about an Apple product.

Or compare an iPhone to to many of the other smart phones out there today. We have one of those too, so we can do the comparison. Its clunky to run, the connections are weak, and the service isn’t the best.

And it isn’t all about the products. When you go into an Apple store, you’re walking into an experience. You can go in with any question, and have it answered immediately. Its just a cool place to be. Where else can you have people lined up out the doors, waiting for hours to be one of the first to buy the “latest” product.

What I’ve been talking about up until now is the company, the product and the experience. And that all came about thanks to one man – Steve Jobs. He revolutionized how we use our minds, what we can do with our ideas, and how we can communicate with the rest of the world. He’s made a relatively small world even smaller, and made us have things in common with people thousands of miles from us.

Will Apple continue without Steve Jobs? Of course. He has set up the business to run and inspire well into the future. Things change, and we’ll change right along with it. He’s set things in motion, and it will continue for many years to come.

Can you use iPads to make your photography that much better?

Can you use technology to inspire someone today?

Can you change the way you say things, and really make a difference?

Dig Deeper: How Much Power Your Words Really Have

I challenge you to inspire someone today.