Photography Trivia – Do You Know The Answer?

Who invented the camera?
The forerunner to the camera was the camera obscura, which was an instrument consisting of a darkened chamber or box, into which light was admitted through a convex lens, forming an image of external objects on a 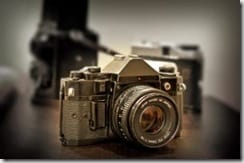 surface of paper or glass. The camera obscura was described by an Arabic scientist in his Book of Optics, written in the early 11th century.

The first camera that was small and portable enough to make photography practical was built by Johann Zahn in 1685, though it took another 150 years for the technology to be used regularly.

When was film first invented?
Eastman invented a flexible, paper based photographic film in 1884. In 1888, Eastman patented the Kodak roll film camera.

Who opened the first photography studio?
The first professional photography studio in the U.S. was opened in 1840 in New York by Alexander S Wolcott and John Johnson. Photography studios of this era catered to the elite, who were fascinated by the ability to have their likeness created in minutes as opposed to the hours or even days it took a painter.

Who is the most famous/recognizable photographer?
This is obviously a subjective question, depending on our interests. So we thought we’d list a few based on our research.

Henri Cartier Bresson – first to capture life as it happened