Video recorder the size of your iPod from Flip Video Mino

I love video and it is fun to watch what you record later on but hate to drag my clunky video camera everywhere I go. Flip video has a new product named Mino that is as small as an iPod Nano. Here is a press release information on the product:

3 oz. camcorder is the ultimate accessory for the social networking generation 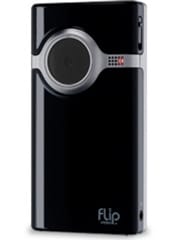 pocket to capture life’s stories whenever and wherever they happen – at a party, a concert, the beach, even on a bike ride.  The $179.99 (MSRP) Mino also features Flip Video’s built-in software that allows consumers to simply plug the camcorder’s signature flip-out USB arm into any computer for immediate editing and sharing. For the first time, the Flip Video software enables users to upload video directly to MySpace as well as to YouTube and AOL Video, making it even easier to share video.
“Flip Video Mino delivers the perfect combination of high-quality video, sleek design, and ease of use,” said Jonathan Kaplan, CEO of Pure Digital Technologies.  “For the millions who share their lives online every day, it’s more than a camcorder – it’s a fun tool for communicating and creatively expressing themselves.”
With 2GB of on-board flash memory, Mino allows consumers to capture up to 60 minutes of high-quality video using the camcorder’s intuitive new touch-sensitive buttons to record, play, fast forward, rewind, pause and delete.  Users can instantly play back video on the camcorder’s 1.5-inch anti-glare LCD display. Mino uses an internal, rechargeable lithium-ion battery that conveniently recharges whenever the camcorder’s USB arm is connected to a computer and provides more than four hours of recording time on a single charge.
Using Mino’s built-in software, consumers are able to edit and share videos instantly from a PC or Mac. In addition to quickly posting videos on sharing and social networking sites, they can email videos and video greeting cards; create custom movies with their own music; capture still photos from video; save and organize videos on the computer; and, for the first time, seamlessly order and send DVDs anywhere in the world.

“Video is a major part of the MySpace experience and the Mino’s portable design means MySpace users can capture their life as it happens,” said Josh Brooks, vice president of marketing for MySpace. “We are excited to partner with Flip Video to make it easier than ever for MySpace users to directly upload and share content on MySpaceTV.”